Spinal muscular atrophy (SMA) is a rare neuromuscular disorder that results in the loss of motor neurons and progressive muscle wasting. It is usually diagnosed in infancy or early childhood and if left untreated it is the most common genetic cause of infant death. It may also appear later in life and then have a milder course of the disease. The common feature is progressive weakness of voluntary muscles, with arm, leg and respiratory muscles being affected first. Associated problems may include poor head control, difficulties swallowing, scoliosis, and joint contractures.

The age of onset and the severity of symptoms form the basis of the traditional classification of spinal muscular atrophy into a number of types.

Spinal muscular atrophy is due to an abnormality (mutation) in the SMN1 gene which encodes SMN, a protein necessary for survival of motor neurons. Loss of these neurons in the spinal cord prevents signalling between the brain and skeletal muscles. Another gene, SMN2, is considered a disease modifying gene, since usually the more the SMN2 copies, the milder is the disease course. The diagnosis of SMA is based on symptoms and confirmed by genetic testing.

Usually, the mutation in the SMN1 gene is inherited from both parents in an autosomal recessive manner, although in around 2% of cases it occurs during early development (de novo). The incidence of spinal muscular atrophy worldwide varies from about 1 in 4,000 births to around 1 in 16,000 births, with 1 in 7,000 and 1 in 10,000 commonly quoted for Europe and the US respectively.

Outcomes in the natural course of the disease vary from a few months in most severe cases to normal life expectancy in milder SMA forms. The introduction of causative treatments in 2016 has significantly improved the outcomes. Medications that target the genetic cause of the disease include nusinersen, risdiplam, and gene therapy medication onasemnogene abeparvovec. Supportive care includes physical therapy, occupational therapy, respiratory support, nutritional support, orthopaedic interventions, and mobility support.

Newer classifications classify patients into "non-sitters", "sitters" and "walkers" based on their actual functional status.

Motor development and disease progression in people with SMA is usually assessed using validated functional scales – CHOP-INTEND (The Children's Hospital of Philadelphia Infant Test of Neuromuscular Disorders) or HINE (Hammersmith Infant Neurological Examination) in infants; and either the MFM (Motor Function Measure) or one of a few variants of the HFMS (Hammersmith Functional Motor Scale) in older patients.

The eponymous label Werdnig–Hoffmann disease (sometimes misspelled with a single n) refers to the earliest clinical descriptions of childhood SMA by Johann Hoffmann and Guido Werdnig. The eponymous term Kugelberg–Welander disease is after Erik Klas Hendrik Kugelberg (1913–1983) and Lisa Welander (1909–2001), who distinguished SMA from muscular dystrophy.[18] Rarely used Dubowitz disease (not to be confused with Dubowitz syndrome) is named after Victor Dubowitz, an English neurologist who authored several studies on the intermediate SMA phenotype. 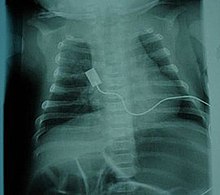 The symptoms vary depending on the SMA type, the stage of the disease as well as individual factors. Signs and symptoms below are most common in the severe SMA type 0/I:[medical citation needed]

Spinal muscular atrophy is linked to a genetic mutation in the SMN1 gene.

Human chromosome 5 contains two nearly identical genes at location 5q13: a telomeric copy SMN1 and a centromeric copy SMN2. In healthy individuals, the SMN1 gene codes the survival of motor neuron protein (SMN) which, as its name says, plays a crucial role in survival of motor neurons. The SMN2 gene, on the other hand – due to a variation in a single nucleotide (840.C→T) – undergoes alternative splicing at the junction of intron 6 to exon 8, with only 10–20% of SMN2 transcripts coding a fully functional survival of motor neuron protein (SMN-fl) and 80–90% of transcripts resulting in a truncated protein compound (SMNΔ7) which is rapidly degraded in the cell.

In individuals affected by SMA, the SMN1 gene is mutated in such a way that it is unable to correctly code the SMN protein – due to either a deletion occurring at exon 7 or to other point mutations (frequently resulting in the functional conversion of the SMN1 sequence into SMN2). Almost all people, however, have at least one functional copy of the SMN2 gene (with most having 2–4 of them) which still codes small amounts of SMN protein – around 10–20% of the normal level – allowing some neurons to survive. In the long run, however, reduced availability of the SMN protein results in gradual death of motor neuron cells in the anterior horn of spinal cord and the brain. Muscles that depend on these motor neurons for neural input now have decreased innervation (also called denervation), and therefore have decreased input from the central nervous system (CNS). Decreased impulse transmission through the motor neurons leads to decreased contractile activity of the denervated muscle. Consequently, denervated muscles undergo progressive atrophy (waste away).

Muscles of lower extremities are usually affected first, followed by muscles of upper extremities, spine and neck and, in more severe cases, pulmonary and mastication muscles. Proximal muscles are always affected earlier and to a greater degree than distal.

The severity of SMA symptoms is broadly related to how well the remaining SMN2 genes can make up for the loss of function of SMN1. This is partly related to the number of SMN2 gene copies present on the chromosome. Whilst healthy individuals carry two SMN2 gene copies, people with SMA can have anything between 1 and 4 (or more) of them, with the greater the number of SMN2 copies, the milder the disease severity. Thus, most SMA type I babies have one or two SMN2 copies; people with SMA II and III usually have at least three SMN2 copies; and people with SMA IV normally have at least four of them. However, the correlation between symptom severity and SMN2 copy number is not absolute, and there seem to exist other factors affecting the disease phenotype.

Spinal muscular atrophy is inherited in an autosomal recessive pattern, which means that the defective gene is located on an autosome. Two copies of the defective gene – one from each parent – are required to inherit the disorder: the parents may be carriers and not personally affected. SMA seems to appear de novo (i.e., without any hereditary causes) in around 2–4% of cases.

Spinal muscular atrophy affects individuals of all ethnic groups, unlike other well known autosomal recessive disorders, such as sickle cell disease and cystic fibrosis, which have significant differences in occurrence rate among ethnic groups. The overall prevalence of SMA, of all types and across all ethnic groups, is in the range of 1 per 10,000 individuals; the gene frequency is around 1:100, therefore, approximately one in 50 persons are carriers. There are no known health consequences of being a carrier. A person may learn carrier status only if one's child is affected by SMA or by having the SMN1 gene sequenced.

Affected siblings usually have a very similar form of SMA. However, occurrences of different SMA types among siblings do exist – while rare, these cases might be due to additional de novo deletions of the SMN gene, not involving the NAIP gene, or the differences in SMN2 copy numbers.

The most severe manifestation on the SMA spectrum can be noticeable to mothers late in their pregnancy by reduced or absent fetal movements. Symptoms are critical (including respiratory distress and poor feeding) which usually result in death within weeks, in contrast to the mildest phenotype of SMA (adult-onset), where muscle weakness may present after decades and progress to the use of a wheelchair but life expectancy is unchanged.

While the above symptoms point towards SMA, the diagnosis can only be confirmed with absolute certainty through genetic testing for bi-allelic deletion of exon 7 of the SMN1 gene which is the cause in over 95% of cases. Genetic testing is usually carried out using a blood sample, and MLPA is one of more frequently used genetic testing techniques, as it also allows establishing the number of SMN2 gene copies.

Your support and contributions will enable me to meet my healthy goals and improve conditions. Your generous donation will fund my life mission.

Alone we can only do so little; but together we can do so much more